Over the weekend, I was off being taught how to teach English. It was a bit exhausting, admittedly, because it was a 20-hour course, but it was fun and I learnt a lot and got to “teach” a few lessons to the class.

One of the activities we did, though, was aimed at getting us to understand what it’s like to be an intermediate learner reading a text and understanding most, but not all, of the text. In order to simulate this, there were about ten Scots words interspersed throughout the text.

(I could already understand about 80% of them, but that’s not the point. Actually, I have a slight problem with Scots in that I can read and understand it just fine, and know a lot of the words and phrasing quirks, but sound like an idiot when I try to speak it. Maybe I just can’t get the accent right. But let’s not talk about that now…)

But, funniness of a text with random Scots words aside (I chortled to myself the whole way through the first time – I wasn’t expecting it), what was even more hilarious was the list of translations/definitions my class came up with:

Sigh. Australians. What do you do with them? Who else would translate one set of dialect words into another dialect?

Just as a final note, some of these translations happened once we got a bit silly. By that, I mean “dinky-di” and “bonza”. A lot of the other words, such as “cranky”, “tizzy”, and “bludger”, really were the first translation the class thought of – although, personally, I said that “skive” is the same here and the translation of “blether” is “blather”. Apparently that’s just me, though. 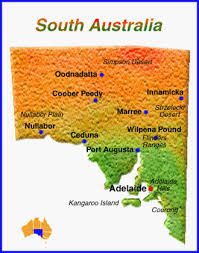 I’m also not going to be talking about my own accent, because it’s a hopeless mish-mash which includes eastern states, English, Scottish, and Kiwi traits, as well as most of the SA traits. I don’t really want to use myself as evidence for any of these things, but rather my sister, (occasionally) my mother, and pretty much everyone else around me.

Yes, there is one, and yes, it is different from other Australian accents. I’ve mentioned before that I partially disagree with the commonly-used classification system of Australian accents (Broad, General, Cultivated), but even proponents of this system will agree that South Australians sound different.

Of course, many of the features I’m going to talk about occur in other Australian accents, too, so I’m only going to point out the ones that don’t occur, and tell you what happens instead in eastern states accents.

The first feature about which I’m going to talk is non-rhoticity. Now, this is a pretty obvious thing to say, given that almost all British dialects, Australians, Kiwis, and even a couple of obscure American dialects (in Louisiana, I think) are non-rhotic.

A Simpson sums up my opinion of the new logo. It’s meant to represent a door, but seriously? You need a new logo for SA, so you do it by getting a map of Australia and cutting the state out of it?

Basically, what “non-rhotic” means, is that we don’t pronounce the “r” on the ends of words that end with “er” (or “re”), such as water, metre, feature, swimmer, theatre, and so on. Instead, it is pronounced as something like “a” or “uh”: worta, meeta, feecha, swimma, theata, etc.

The next feature is the trap-bath split. Basically that means that the two words are pronounced different, “trap” with a short “a” as in “cat”, and “bath” with a long “a” as in “father”. Of course, all varieties of Australia have this split, but it is the extent to which it exists in South Australia which is notable. A lot of words are pronounced with a long “aa” in SA which are pronounced with a short “a” in the eastern states, mostly where the “a” is immediately followed by an “n” or an “m” – for example; dance, advance, plant, and branch, for example, but also other words, such as grass and graph. A word of advice: never get a South Australian and any other Australian to since the national anthem together.

The next feature is the y-glide. Like non-rhoticity, this is a feature of British English (and not American English), so it’s not too surprising that it exists in Australian English, too. However, like the trap-bath split, it is not as fully realised as in Queen’s (RP) English.

Basically, what a y-glide is, is that “u” or “oo” sounds are very often pronounced with a “y” in front. Such words are new, due, Tuesday, tune, and so forth. (Which is why American children sometimes mix up “do” and “due”, but Australian children never would, because for us, the two words sound different). But there are a lot of words where there is no y-glide, but where there would be in RP English (and some Australians might pronounce it, but it’s rare), such as suitable, blue, and diluted.

However, Australians can sometimes be lazy in actually pronouncing this y-glide, usually after a “t” or a “d”. Thus, due and dew are “joo”, Tuesday is “choozday”, tune is “choon”, and dune is “joon”. This also means that common word combinations which feature a “d” or a “t” followed by a “y” are also pronounced this way; for example, “last year” and “next year” are pronounced “lars jeer” and “necks jeer”.

The old logo, which I vastly preferred.

The next feature is l-vocalisation, which, as far as Australian accents are concerned, is a uniquely South Australian thing. Which this means is that an “l” which falls on the end of a word or immediately before another consonant sounds more like a “w” or a “y”. It looks a bit silly when you write it, so I’m not going to really try. I’ll give you an example, though; a boy named Will has his name pronounced with the same sound at the end as at the beginning. His full name has “yam” tacked on the end: Wiwyam rather than William. “Miwk” rather than “milk”.

I’ve read that l-vocalisation also occurs in Cockney, but I’m pretty sure that South Australians would get it from all the Scottish settlers. Although I have not read anywhere that this is a feature of any Scottish accent, I’ve noticed that in Scots, words such as “football” are written “fitba” or “fitbaw”, which to me implies that something like l-vocalisation is happening to the final consonant.

The next feature is full diphthongs, which is another thing which, if not unique to South Australia, is less likely to occur in other states. This means that some words which are pronounced with one syllable in other states, such as near, beard, hear, here, tour, grown, known, and so forth, are in South Australia pronounced as “nee-ya” (near), “bee-yud” (beard), “hee-ya” (hear and here), “too-wa” (tour), gro-wun (grown), no-wun (known), etc.

The final feature I’m going to mention doesn’t have a name – at least, not as far as I’m aware. It’s something akin to t-glottalisation, except that the “t” in question isn’t actually pronounced as a glottal. As far as I can work out, from listening carefully and trying out words in my own mouth, we move our tongue and mouth into the correct position for the “t”, but stop vocalising before we can pronounce it. Thus, words such as “fruit”, “ute”, and “plant”, are often missing their final “t”, and words like “Atlantic” are often missing the initial “t” (or, the “t” at the end of a syllable). So, for example, in a word like FruChocs, which, despite missing the “t” on the end of initial syllable, a South Australian will hear as “fruit”, whether consciously or subconsciously, which (for me, anyway) immediately conjures up an image of exactly what a FruChoc is – fruit and chocolate.

I don’t know whether this happens in other states, but it’s pretty widespread in SA – to the point where the conductor at the Festival of Music (another SA thing) gesticulates wildly and makes a giant “T” with his arms every time the letter comes up. Not that we ever sang “Silent Night” mid-year, but we end up singing something like this: “Si-ilent nigh-TUH, ho-oly nigh-TUH, all is calm, all is brigh-TUH, round yon virgin mother and chil-DUH, holy infant so tender and mil-DUH!”

Finally, I will finish by giving a couple of words which differ in South Australia from other states: 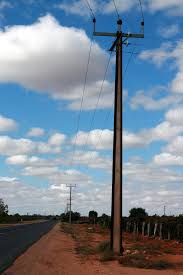 Stobie Pole. (Other states have telegraph poles. We don’t have trees.) 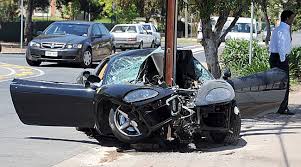 Fritz. (Other states have Devon). And Smiley Fritz. 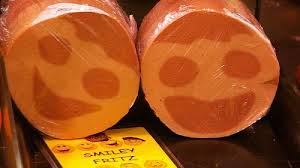